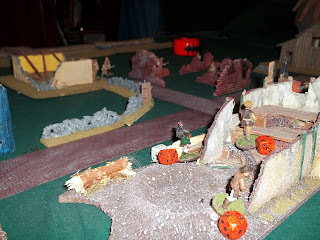 What a mistake Tyr "the Scot," Mac Browny and Rudolf Hesdarmant made by advancing and not digging in as all three are wounded and pinned down by heavy fire. Worse still, aside from one light wound, they have yet to seriously hurt a single enemy soldier! 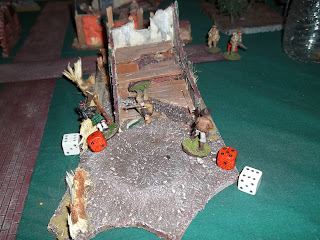 "Guten Gott," are Rudolf's last words as he is felled by a British bullet. Tyr and Mac are too busy ducking to morn the loss of their comrade. 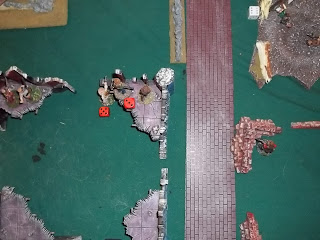 Things are getting serious as both Ian Bakker Smuutts and Field Commandant Burkson are also hit by the increasingly incredible expert shooting of the British.  The Gods of War must truly be with the Imperials worries the Field Commandant as yet another volley of friendly fire fails to score a single serious hit! 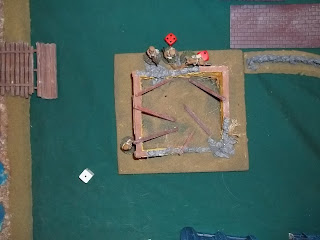 Having braved the "unlucky" fire of the rebels, Captain Fenworth-Parksman and his forward fire team have closed to short range suffering only two light wounds between them.  A few more well aimed volleys should put paid to these misguided fools thinks the captain as he takes aim with his trusty .45 Webly. 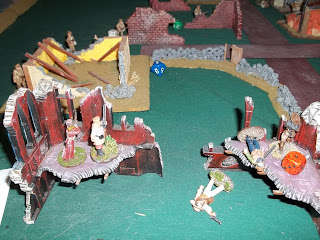 "Damn, I told him we should bring the Lewis Gun!"cries out Sir Hallerly Misaloots III, after Ian Bakker Smuutts and Field Commandant Olaf Burkson are both dropped by the latest British volley.  The only positive has been the marksmanship of Lady Helga von Wurtenmasker, late Kapitän of the Crown Princess Michelle Hussars, as she drops Pvt. Carlson with a well placed shot between his eyes. (Just visible in the far upper right corner.) 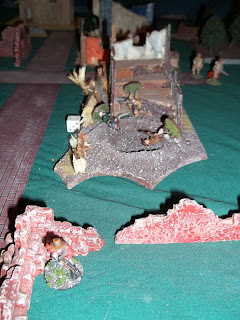 Just like their commandant,Try and Mac are also felled by accurate British shooting. "Time to leave to fight another day," says Hans Brinkers as he heads towards a more friendly territory. 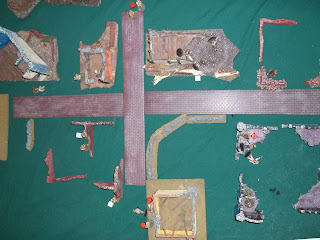 The rest of the rebels decide to follow suit, grabbing Ian and their fallen commander, they follow Hans to safer lands.  All that shooting and only one enemy dropped-the ammo was obviously rotten-words will be had with the quartermaster!

This was a fun game between Tom and myself as a quick battle to field test changes to my pulp battle rules.  He took a larger unit of regulars vs my smaller force of veterans. I really have to take him to Vegas as man can he roll hot dice.  Every round of fire he scored at least one hit, he made almost every save and passed the few morale rolls required while my dice were so bad I hardly ever hit-even figures in the open.  What a great time, lots of laughs and fast action.

The figures are all 28mm metal, and are from Renegade- British, Rudolf; Brigade- Hans, Sir Hallerly, Ian and the Field Commandant; Foundry- Mac, Tyr,  Lady Victoria Marksmaster (she missed every shot) Pulp and Hinderland-Lady Helga
Posted by Ushistoryprof at 7:19 PM