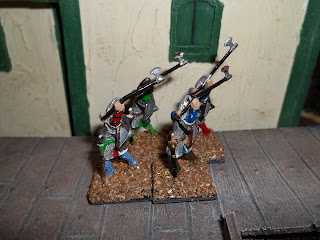 These four housecarls of the last Saxon king of England, Harold II, are experts with their two handed battle axes. 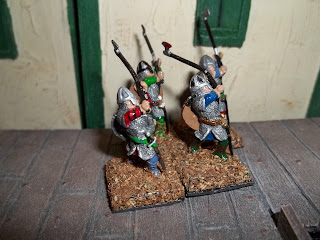 Proving their skills in battle by defeating the Vikings at Stamford Bridge, they felt more than capable to handle the upstart Norman invaders under Duke William at Hastings. 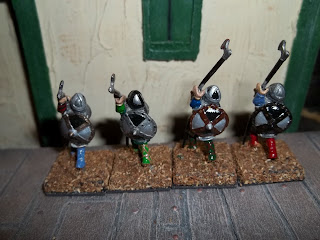 At Hastings they fought well, and died with their king, and William earned a new title-"the Conqueror."

I painted these 25mm metal pieces from Minifig in the mid 1970's. They saw stellar action in many D&D campaigns and Medieval battles. They were finally retired from action in the early 1990's when I moved on to the larger scaled Games Workshop figures for my Medieval/Fantasy Armies.
Posted by Ushistoryprof at 6:23 PM