CSS Kentucky (aka Skeered A' Nothing) 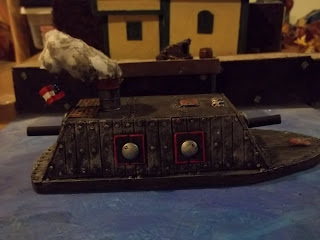 The powerful CSS Kentucky (affectionately known as "Skeered A' Nothing" by her crew) puts on steam as she prepares for battle. She is the first of a new class of fast, heavily armored warships that will make the Confederate Navy the master of the Gulf and Atlantic Coasts. 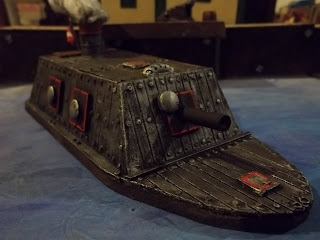 The Kentucky is armed with two 9.5 inch Armstrong RML cannon on tracks that allow them to be trained two to port or starboard or one each to the bow and stern. This great savings in weapons weight allows the Kentucky to have the thickest armor (over 8 inches of iron on 24 inches of live oak on the angled casement) afloat on a ship her size. 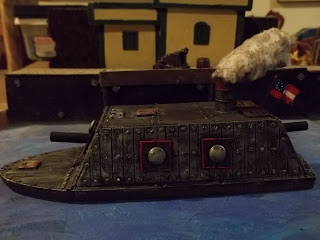 Kentucky has a new and more powerful steam engine that allows her to reach speeds of over 15 knots (on smooth water). 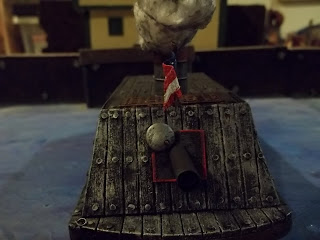 Another new invention on the Kentucky is the double armored gunports, in hot actions the small swivel port (8 inches of iron thick ) opens allowing only the cannon to be exposed to enemy fire. For more long range angled fire the massive double armored gunports (10 inches of iron thick) can be opened. While reloading, the cannons are retracted behind these massive barriers. 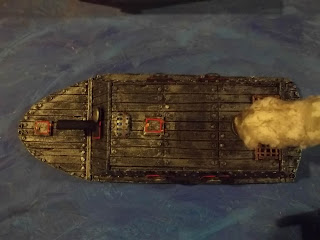 Kentucky is a scratch built warship for VSF, War Between the States and Steampunk battles. To see how she was built check my post- "CSS Skeered A' Nothing WIP"
Posted by Ushistoryprof at 7:17 AM