The Captain has a Secret 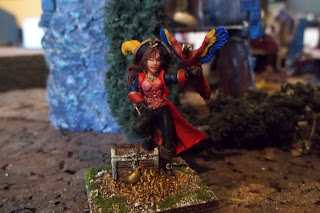 Captain Mimi Rouge, while a tough leader, she is very generous in sharing her treasures with her crew. In a strange contrast the crew has also noticed that the Captains temperament is sweet towards her crew but vicious and bloodthirsty towards her enemies. 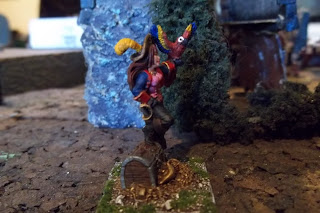 Her constant companion is the brightly colored Peppy. The crew believes that he is a good luck charm as neither he nor his master has ever been felled in battle. Her ability to "turn" what would appear to be serious or fatal wounds in combat is legendary.


But perhaps the captains good luck and seeming invulnerability owes is its roots to some other means... 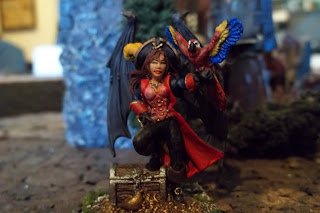 Captain Rouge is careful not to let her true nature be known to but a few well chosen
companions. 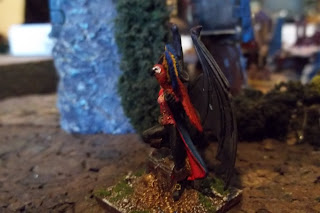 Those she trusts are allowed to see her as she truly is-the half-blood daughter of the most famous count of Transylvania. 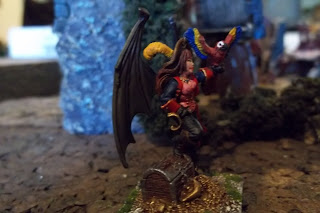 Her half-blood nature gives her the strength of her ancestor with the ability to travel in the both the worlds of day and night. Her crew is also lucky that Mimi's need for blood is less demanding than that of her sire. 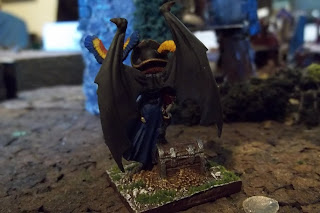 Captain Rouge is the metal 28mm piece Captian Sophie, Succubus from Reaper Figures. She is the new captain for the Black Pearl II (see "Did You Say Pirates" April 2010).
Posted by Ushistoryprof at 2:56 PM