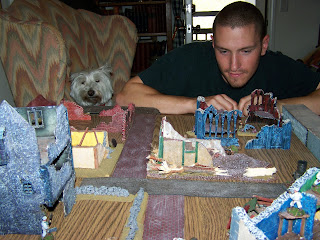 After putting Ivan Redengloy OOA (Out Of Action) with another blast from Dedii's BAR, Thomas is looking confident-although his mascot Charlotte is looking a bit tired. 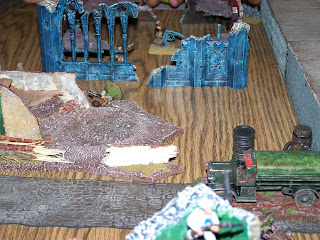 Finally Dedii is taken down by Ilyan (Having taken Sgt. Roc, Tatar and Ivan OOA and pinned three other Sailors, Dedii was the most effective figure for both sides). Baker and Adams then drop Andre. 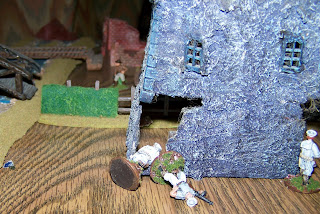 The bodies are beginning to pile up from Lt. Gratte's deadly Colt .45 (He has also pinned the sailor to the right of the picture.) 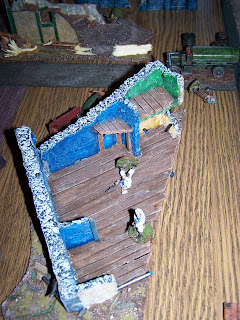 The accurate fire of Baker and Adams panics Ilyan who decides it is his responsibility to inform HQ of the valiant "death" of Commissar Redenglory (actually he was a bit premature as the Commissar was not yet dead only OOA). On the left, Lt. Stalinski has decided that only a mad rush at the Americans can win the day! 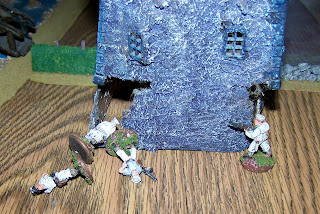 He was wrong! As he is cut down by very accurate fire-interestingly enough the Marines found a .45 cal flesh wound in his front and a fatal 7.62mm wound in Lt. Salinski's right/back side. Boris who is reloading, has also decided leave and tell HQ of the brave yet failed final charge of the Lt. Stalinski. (In a panic Boris shot at the unexpected movement of the Lt. and dropped him-the way things were going it might not have been panic after all.) 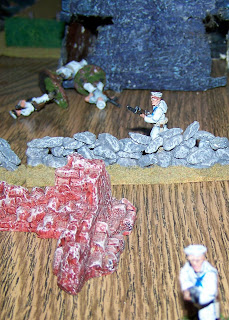 Boris and Ilia join Ilyan in advancing to the rear with vital information for HQ. 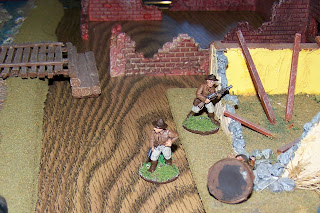 With the last three surviving sailors withdrawing in a speedy manner. Lt. Gratte and his Marines have saved the fuel depot and captured wounded Sailor Andre and a quite alive Ivan Redengloy, KGB Commissar (Lt. Stalinski and the other wounded sailors had taken fatal injuries. The cost of victory was great for the Marines as Witmore, Sgt. Roc and Lcpl Dedii all succumbed to their wounds. (It was a fun game especially with two men -Lt. Stalinski and Sgt Roc-dropped by their own side. Thomas and I had lots of laughs throughout the battle. The next engagements must solve the PRAM transportation problem and rescue Redenglory.)
Posted by Ushistoryprof at 8:02 AM