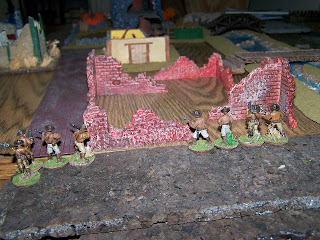 Two fire teams of US Marines have been detailed to secure a fuel depot recently abandoned by colonial troops in the burned out hamlet of Walenport. Team one is under the command of LT. I.B. Gratte armed with a Colt .45 automatic, Pvt. Witmore with a 12 gauge trench gun and Pvt.'s Smith and Jones with .30 Springfield rifles. (All are veteran's.) Team two is under Sgt. Roc (Elite) with a .45 Tommy Gun. Lcpl. Dedii has a .30 BAR and Pvt.'s Adams and Baker are armed with .30 Springfield rifles. (The pvt.'s and Lcpl. are veteran's.) All riflemen have bayonets, the others have combat knives. 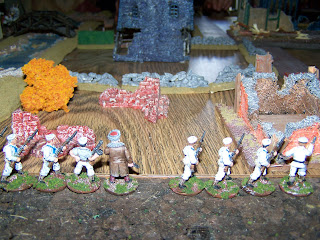 KGB Commissar Ivan Redenglory (Elite) with a .45 automatic and brass knuckles has a squad of Soviet Sailors, disguised in captured western uniforms to fullfill his mission. In order to get his captured PRAM Secrets (See Adventure of the Dragon Bones-DB Adventure) to friendly territory, Redenglory needs the fuel at the depot. The Comrade Sailors Ilia, Boris, Tatar, Alexi, Ilyan & Andre are armed with Model 1891, 7.62mm rifles with bayonets. Comrade Sailor 1st class Remski is armed with a capitalist .45 Tommy Gun. Lt. Petrov Satalinsk (Green) is in command and is armed with a .38 revolver. (All the sailors are regulars.) 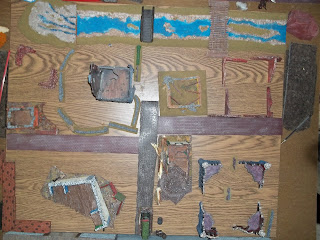 The battlefield-the ruined hamlet of Walenport. The fuel depot is near the middle of the bottom part of the photo. The Americans start line is on the upper right and the Soviets is on the upper left.

All the figures are 28mm metal pieces from Pulp Figures.

Posted by Ushistoryprof at 12:32 PM