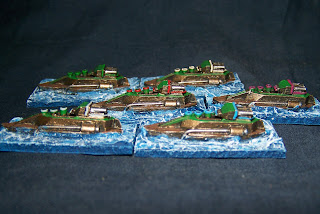 A patrol of Shroud Mage frigates hunt the Uncharted Seas for easy targets. On the horizon Imperial ships are just visible, "Hard About, Ahead Flank Speed to Intercept," is ordered. 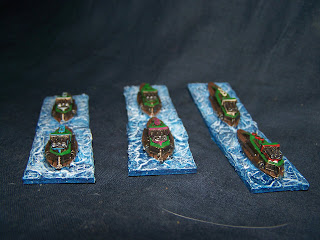 Forming into three columns in line ahead formation, squadron leader "Bewitched" starts the chase. Will they over take the prey before the hunted can fine safety in the sea mists? 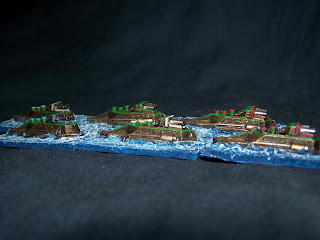 "Clear for Action, Form Columns of Twos, Engage! Behind "Bewitched" in column one are "Rapture" & "Enchantment." In column two are "Voodoo," "Sorcery" & "Conjuration."

These are resin castings from Spartan Games. They are for Uncharted Seas but are suitable for both VSF and Steampunk sea battles.
Posted by Ushistoryprof at 7:15 PM