The "Queens Duty" must get Through 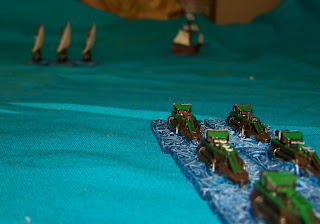 The Mage frigates have caught up with the "Queens Duty" and her escort. 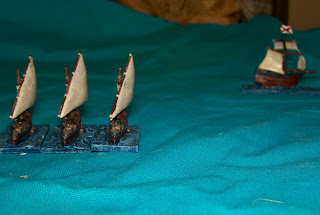 The three martyr frigates head into the wind to try to close with the Mage frigates. 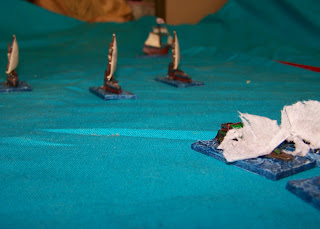 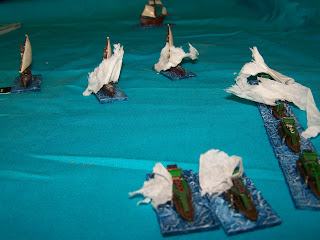 Return fire sinks two of the Imperial frigates "Temptation" & "Sacrifice,", but "Temptation" manages to set of her suicide charges destroying itself and the two lead Mage frigates "Rapture" & "Sorcery." (Luck was with the last Imperial frigate "Redemption" as while she to was in the blast radius of the exploding "Temptation" the attack dice only caused one hull hit. As all the frigates had only two hull hits before they sunk, this was a true stroke of luck as she was available for the next turn. 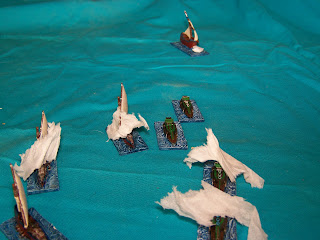 Pressing on, the two remaining Mage ships target the "Queens Duty," smashing round after round into her hull. But she still makes way, turning to bring the remains of her starboard battery to bear. (The Mage ships would have been smarter to finish off the damaged "Redemption,"
rather than fire at medium range at the "Queens Duty"). 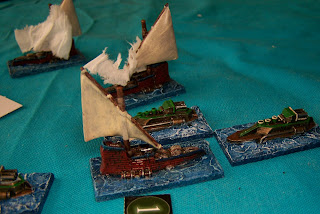 The last human frigate, "Redemption," tacks into the wind and closes with the two Mage ships, "Enchantment " & "Conjuration." The crew sets off the magazine charges and destroys its self and its two enemies. (The blast radius is four inches and after what happened to earlier, the Mage commander should never have kept his two remaining ships so close together). 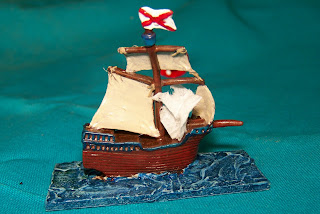 Damaged but still under sail, the "Queens Duty" full fills her vital mission. (Throughout the game the Imperial ship won initiative which limited the better firepower of the Mage ship.)
This was just a solo test battle for the Uncharted Seas. All the pieces were resin.

Posted by Ushistoryprof at 8:56 PM