Mystery of the Dragon Bones-Turn One First Encounters 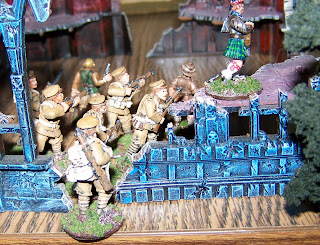 In the predawn hours of darkness Major Fisttriger leads his patrol into the old ruins. 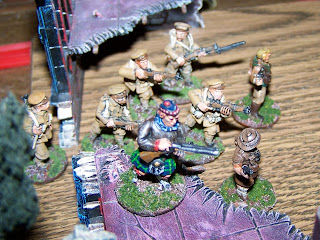 Due to his lack of detailed knowledge of the area, the major proceeds with deliberate caution. 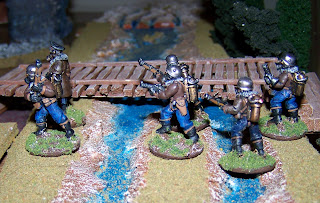 Forgoing the footbridge, the Imperial Air Troopers advance through the stream.
(losing 1/4 of their movement rate in the process) 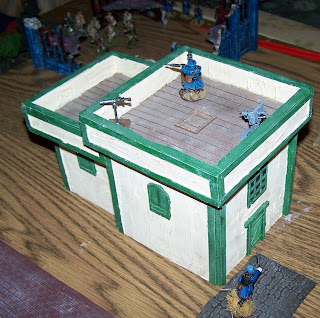 While patrolling the roof Pvt. Deaxue catches a glimpse of several of the British soldiers and snaps off a shot, Pvt.'s Jones and Tanner return fire. (A run of bad luck for the British, Deaxue's move was random and right towards them, he then made a successful sighting and took a snap shot, the two British privates then failed their intelligence test and fired back giving away their positions to anyone in sight range). In the dark none of the shots hit but now the alarm has been sounded. 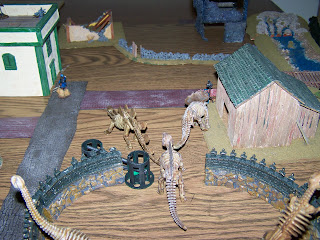 The volley of fire has startled three of the "Dragon Bones." The uncontrolled monsters break open the gate and charge out of the paddock intent on carnage. (This was a random event occurrence when one of the British shots was a critical miss, it let the "Dragon Bones" out of the bag so to speak-way to early in the adventure.) 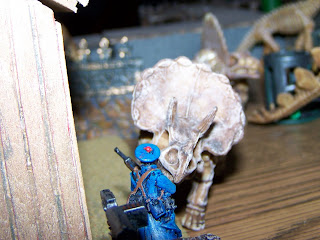 Merde!
Posted by Ushistoryprof at 9:50 PM