Mystery of the Dragon Bones-Turn Four, Lets Get Ready to Rumble 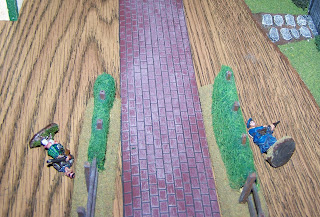 True to his aggressive nature, Magnus decides to test fate and take out that pesky French Marine, Julien. His excellent marksmanship drops the marine and draws the attention of the Count who has taken control of the HMG. Magnus' luck has turned for the worse as he is taken out of action as a full bust riddles his body. 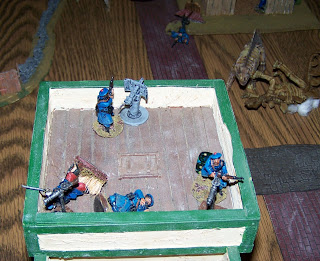 Brave, but foolish, Lieutenant Leufure takes charge of a Lewis Gun. After firing a few rounds he jams the LMG. Even worse as he trys to fix the weapon he exposes himself to the excellent marksmanship of Pvt. Underlong. One well placed shot to the head and the Lieutenant is out of action. (The poor lieutenant couldn't make a good die roll if his life depended on it -which it did. In rapid succession he failed his intellegence roll to lock the trap door, missed three shots with the LMG, jamed the LMG, and failed his luck roll to avoid the shot that put him OOA.) 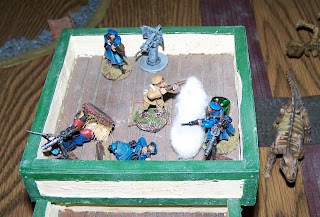 Avoiding the HMG, Major Fisttriger orders his men into the barracks and has Wailingford pop throught the trap door and toss a grenade at the LMG manned by Pvt. Francois. This was the same trap door that the late Lieutenant had forgotten to latch as he ran to the Lewis Gun. 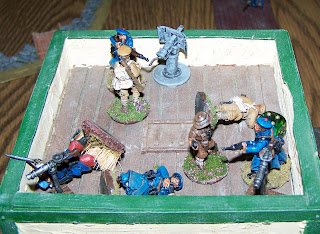 Marine Francois is stunned, but Andrean reacts quickly and drops Wailingford with a snapshot. Markson, bent on revenging his fallen friend, charges Andrean while Fisttriger relies on his Webly to handle the stunned marine. (Making every roll called for Andrean has all the luck the late lieutenant did not.) 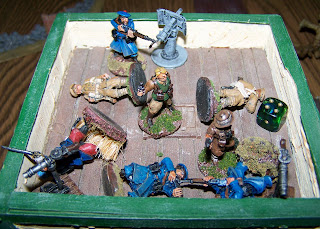 As the major makes quick work of his wounded adversary, Andrean cuts his way through Markson. Captain Reidhammer, apparently over awed by the carnage around him, is unaware of the danger he is in as the victorious marine takes aim and.....
Posted by Ushistoryprof at 7:43 PM