Mystery of the Dragon Bones-Turn Five-Fight or Flight 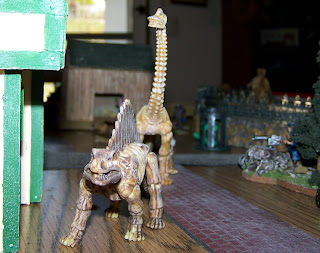 Beware, PRAM on the hunt! 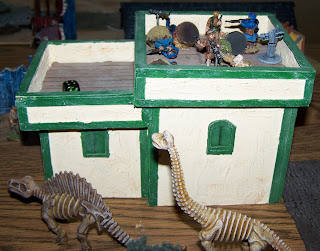 After moving the Lewis Gun to hopefully throw off the aim of the HMG, Major Fisttrigger lets off a full burst towards the mg emplacement. Unfortunately the brontosaurus has masked his fire and gained the PRAM's controllers attention. 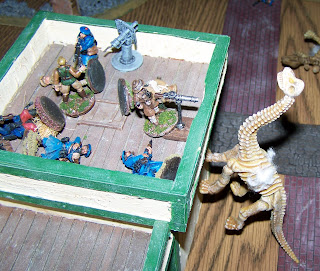 
OMG, no one told me they could climb! Major Fisttrigger tries to fire, but the LMG has jammed. Choosing the better part of valor, the Major beats a hasty retreat. At the same time Captain Reidhammer charges Andrean after the latter missed a clear shot at the captains back. In his excitement the captain trips over the body of his former comrade and stumbles into the fight. In the confused melee that follows the captain scores a light wound on Andrean, but feels the sharp pain of the marines bayonet cut deep into his arm-the fight continues. 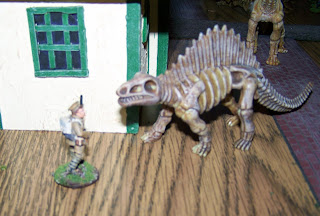 Sgt Smithers and Pvt. Underlong make an unfortunate discovery:
Sgt. Smithers- "Oh Bloody 'll what on Earth is that thing! Look at those teeth...run for you life Underlong runnnn....." 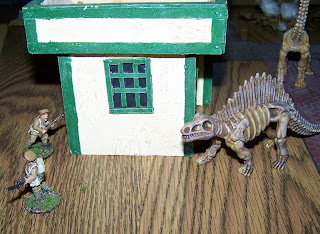 While Smithers runs for the hoped for safety of the ruins, Underlong ducks behind the barracks and decides to follow the major into the building. 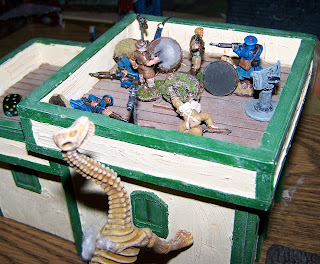 Major Fisttrigger is unclear what to do next he is just now realizing the seriousness of his situation-two or more of his men down, his unit is separated, and no one mentioned giant monsters-what should he do!(having failed his morale roll when the PRAM attacked he ran-a new experience that has shaken his confidence) In the background the melee between the two wounded warriors continues. 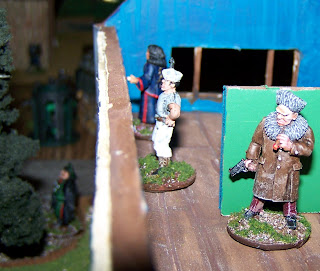 The Dragon Lady and Sam Shovel are happy with the current stand of events. The small visi-screens on their PRAM controls see what the monsters see and it shows the raiders running. But wait, why is Ivan Rednglory hiding around the corner, with a brightly glowing cigar?

Posted by Ushistoryprof at 7:46 PM