Mystery of the Dragon Bones-Turn Three, Beware, Here there be Monsters 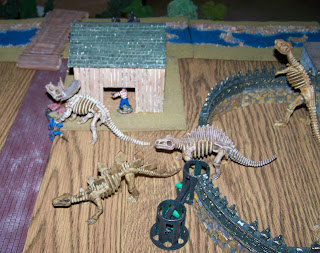 Uncontrolled by any PRAM devices, three monsters run wild. Igor chooses the better part of valor and refrains from shooting. While Pvt. Zola (just out of the bottom of the picture), in fear of his life, brings his own HMG to bear and opens up on the nearest creature. 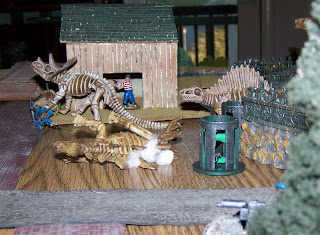 Seeing the tracers flying into one of the monsters, Pvt. Andrean, on the barracks roof, fires his 37mm cannon and destroys the stegosaurus. Zola's HMG is just visible in the lower right. 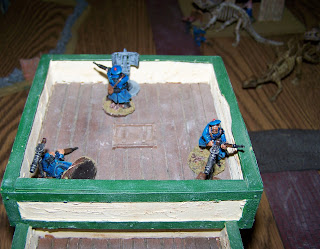 Deaxue is OOA (Out of Action) as excellent British shooting has avenged the death of Pvt. Jones. Unfortunately for the British, the other Lewis Gun is working just fine and succeeds in cutting down Tanner. 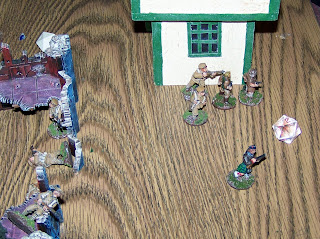 Tanner and Jones are down, Sgt. Smithers remains pinned but Pvt. Underlong keeps up a brisk covering fire for for the rest of the patrol that has rushed to the cover offered by the barracks. While Magus,a loner as always, rushes the hedge. The major sees the fire from the remaining HMG and has a decision to make-rush the weapon in true Great War fashion or take some other path... 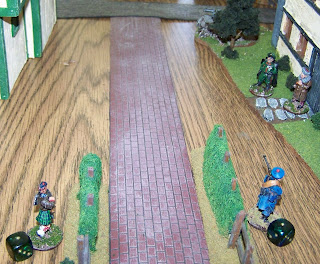 Magnus and Julien exchange shots and succeed in wounding and pinning each other. With all the shooting, the Colonel-General and his manservant are wondering what they have walked into, luckily they have yet to be spotted. One thing though, Colonel-General, Count Alexi Romonav-Stifenback is livid that one of his priceless PRAM creations has been destroyed-someone will pay! 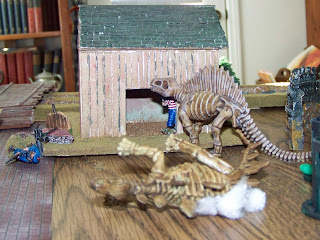 Uncontrolled, the two loose Dragon Bones move where they want. One has decided that Igor looks like a tasty tidbit. 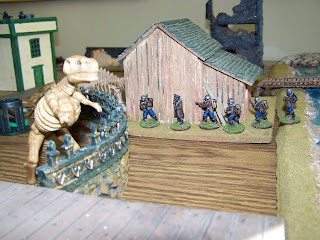 Well, well, well so this is the secret, says Kapitän Richard Himmelskrieger, reanimated monsters, now what should we do. For now proceed with extreme caution and gain these secrets for the Kaiser.

Posted by Ushistoryprof at 7:09 PM