The Supplies Must Get Through 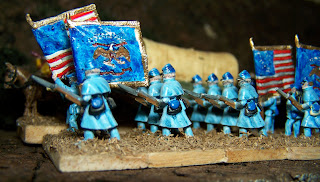 Armies travel on their stomachs is a well known truism. It was as true for the Union Army in the 1860's as it was for Napoleon. By the midpoint of the War Between the States the Southern supply systems were unequal to the task of meeting the needs of the Confederate Armies. Capturing Union supplies was an excellent way to resupply Southern forces. 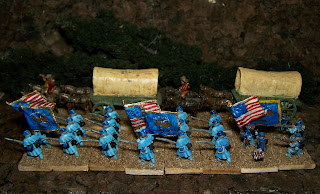 It was just as critical to keep supplies out of the hands of Southern troops as it was for the supplies to make it through to Mr. Lincoln's soldiers. Here the Union supply column is protected by three understrength regiments. (Union policies allowed regiments to fall well below the established strengh of 1100 men, some regiments went into battle with less than 200 soldiers).
First in line is the 2nd Bttn 18th US Infantry, followed by the 1st Bttn of the 18th US Infantry, both from the 3rd Brigade, 1st Division XIV Corps heading towards Chickamaugra. 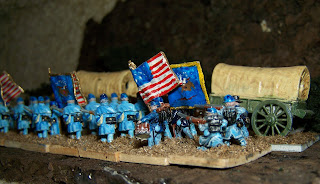 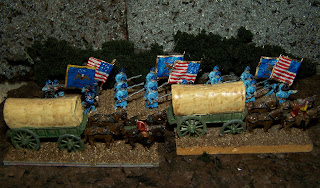 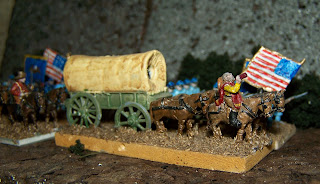 Union regiments went into battle with two
standards, the National Stars and Stripes and the Regimental flag. These are 15mm miniatures from Heritage figures I painted in the 1980's.
Posted by Ushistoryprof at 12:42 PM