The Spanish Tortise, or block of pikemen, was copied by all the European armies of the 15th and 16th centuries. The pike armed infantry were the masters of the battlefield and the battle was won or lost with the "push of the pike" until technology (more effective flintlock muskets)passed them by. As a side note, the Confederate Army actually produced several thousand pikes during the American Civil War for use in pike blocks when the amount of available caplock muskets was in doubt. Luckily for the Southern soldiers the pikes were never used in battle. 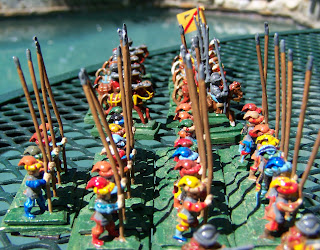 These are more of my figures I painted in the 1970's. They are metal miniatures from Minifig.
Posted by Ushistoryprof at 6:52 PM