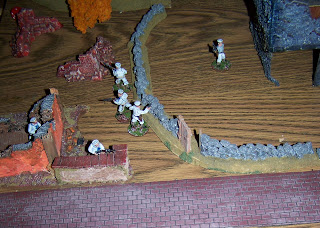 Encouraged by the loss of Sgt. Roc, three Soviet Sailors push forward(as soon as the two riflemen become unpinned), including Remski with the Tommy Gun, going to the left to hold back the Marine fire team of Lt. Gratte. Ilyan and Andre, under Ivan Redenglory's direct control,advance to the right onto the ruins overlooking the fuel depot. The rest of the squad, under Lt. Stalinski, remain in place to give cover fire. 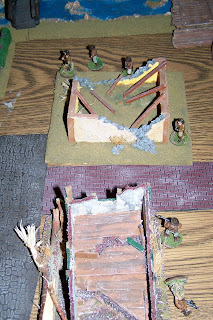 Jones, Lcpl Dedii and Baker(off screen to the right of Dedii) continue to fire at the Soviets as targets present themselves. While Lt. Gratte continues to advance with his other two men towards the cover of the fence and ruins to their front. 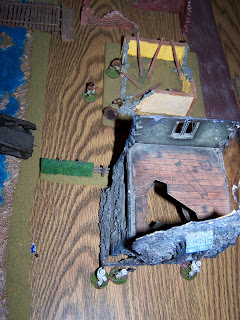 But the Soviet Sailors are already there-a rapid fire fight ensues. Gratte is slightly wounded by the erant fire of Witmore's trenchgun, then Witmore is cut down by Remski's Tommy Gun! Things look bleak indeed for the Marines-two special weapons men are down and the Soviets have yet to receive a serious casualty. 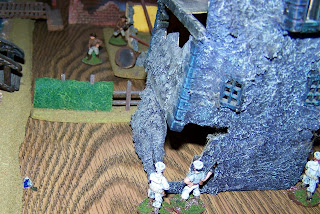 But Lt. Gratte had yet to fight! With only his Colt .45 automatic, he proceeds to drop one sailor after another. The first to drop is Remski-who after cutting down Witmore,couldn't hit the broadside of a barn afterwards. 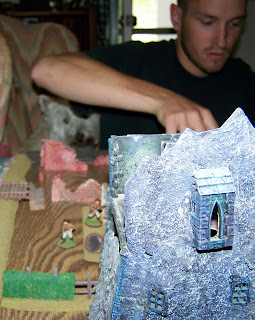 While Smith couldn't hit anything smaller than a building. Lt. Gratte with nerves of steel as every Soviet available tried to take him out, couldn't miss. (Thomas' rolls for Gratte to hit or make his luck rolls were near perfect every time-this lead to lots of laughter and remarks about his cool aiming with his pistol as he would take down yet another sailor.) 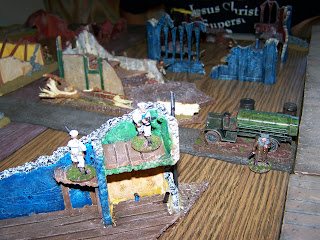 As things took a turn for the worse on the left, Ivan decided to rush the depot-grab the truck and take off with the vital fuel. A nice plan if Lcpl Dedii hadn't seen him. With a well aimed burst from his BAR, Dedii pinned both Ivan and Andre. 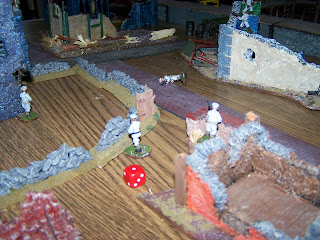 Seeing the Commisar pinned down Stalinski orders Tatar to rush to Redenglorys's aid. Dedii and Baker cut Tatar to pieces as he crosses the open street. In a few short minutes the tide has begun to turn to the favor of the Marines. The next actions by both sides will tell the tell....continued in our next post-End Game
Posted by Ushistoryprof at 8:12 AM