Mystery of the Dragon Bones-Turn Four, Lets Get Ready to Rumble Two 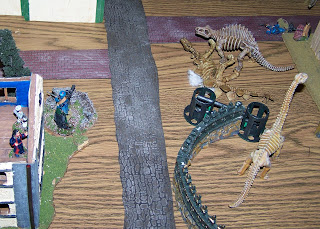 Using their portable PRAM devices, Sam and the Dragon Lady have finally gained control of two of the "Dragon Bones." The monsters are directed towards the fighting at the barracks. The rampaging triceratops has moved north looking for more victims. 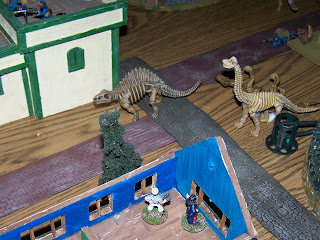 Due to the shell fire and the shorting of the electronic PRAM machinery, the remains of the destroyed PRAM has started to burn as the controlled monsters move past. 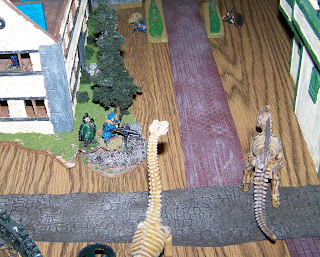 The Colonel General feels more confidant now the the PRAM's are under control. He orders Zola on the HMG to cover the barracks as it is obvious that heavy fighting is occurring there. 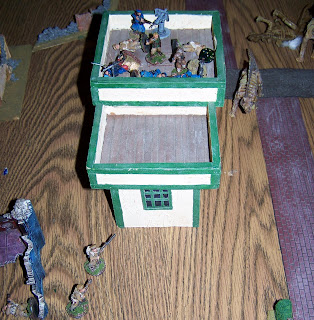 Oblivious to the danger approaching, Sgt. Smithers and Pvt. Underlong advance toward the corner of the barracks to better ascertain the situation. 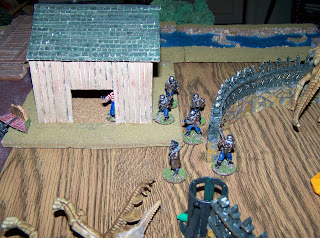 The luck of the Imperial Air Troopers is still holding, no one has sighted them yet and they have seen the HMG (firing in the opposite direction), the PRAM beasts, and Igor hiding in the barn. Roon is proceeding with great caution to see if he can identify any machinery that is being used on the currently docile Dragon Bones in the corner of the paddock (a poor choice to send as his lower Intelligence lead to a failed roll, he will have try again next turn). 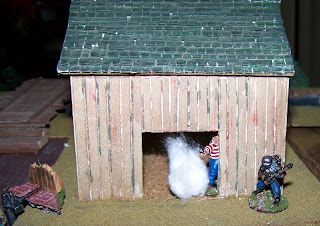 Though hand signals and whispered commands, Heinlick is ordered to take out Igor with a gas grenade(being less explosive it was hoped that in the dark the gas grenade would not be seen and identified as a clear attack by the distracted HMG crew-luck held again and neither the HMG nor Dragon Lady sighted the minor explosion). and follow up HTH combat.

Posted by Ushistoryprof at 7:01 AM