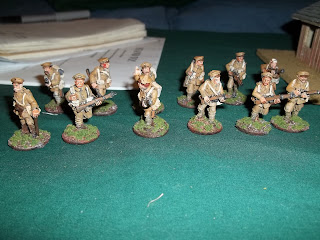 Captain George Fenworth-Parksman IV leads a section of Imperial regulars from the Southeast Frontier Borders with routine orders to patrol the ruins of Tomusville during a period of colonial unrest. 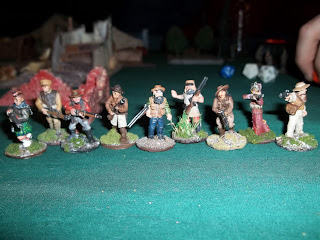 Field Commandant Olaf Burkson (on the far right)also has orders to lead his veteran men and women on a patrol through the ruins. His soldiers may look ragtag and no two have the same weapon but they are experienced and ready to fight for the freedom of their homes and families. His force from left to right consists of Tyr "the Scott, Rudolf Hesdarmant, Hans Brinker, Mac Browny, Ian Bakker Smutts, Sir Hallerly Misalots III, Lady Victoria Marksmaster and Lady Helga von Wurtenmasker. 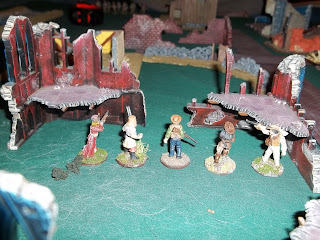 The Commandant divides his force into two fire teams.  Seeing movement ahead he orders his team to dig into the church ruins a bitter sweet order as this was the very chapel where his children were baptised. 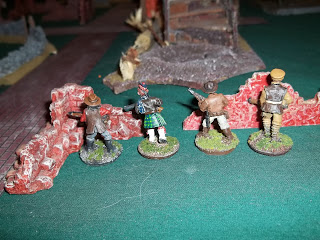 Hans Brinkers (rifleman on the left) also feels digging in would be a good idea but his friends want to close to get better fields of fire. Tyr "the Scot" leads Mac Browny and Rudolf Hesdarmant forward with elan, while Hans packs himself into the rubble with a muttering about fools going where angels fear to tread. 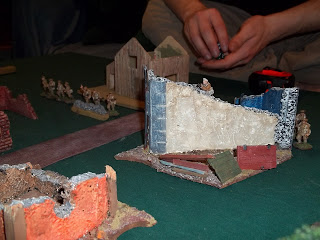 Captain George Fenworth-Parksman IV, orders his men forward with extreme caution, he has seen movement ahead that can only be hostiles. He seems to have more men, brave men but with limited experience, so he will advance in sections giving fire support to each as they advance. 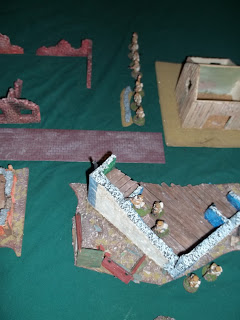 The left section sets up three men in the upper floor of a ruined house while two others begins a flanking maneuver. Hearts pound, adrenaline pumps-the game is a foot. Next moves and casualties.
Posted by Ushistoryprof at 7:34 PM