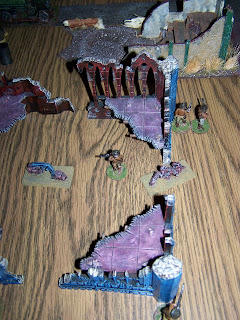 Having received orders to secure the fuel depot, Lt. Gratte sends Sgt. Roc's fire team to advance on the site. Lt. Gratte's team will cover them from the right. S-2 has informed the Marines that all friendly forces have vacated the area so any troops sighted are to be considered hostile. Sgt. Roc leaves Baker to cover the rest of the team as they advance. A good thing too as seeing movement, Baker opens fire on the Russians. 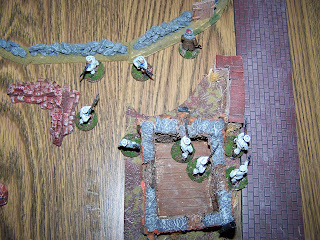 Commissar Redenglory has only one priority-the fuel needed to complete his mission with the PRAM Dragon Bones. His informant has bribed the local militia leader to pull his troops from the area. No resistance is expected, still Ivan orders his sailors to advance with caution taking advantage of the available cover. He is unpleasantly surprised by the accurate rife fire of the Marines pinning two of his sailors. 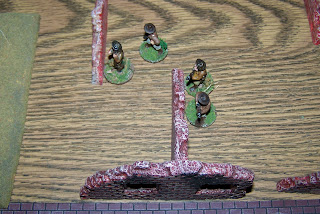 As shooting erupts, Lt. Gratte advances his team through the ruins. Jones is ordered forward to give supporting fire to the sgt's team. 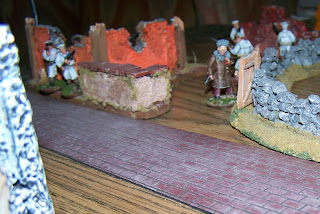 Lt. Salinski is all for rushing the counter revolutionaries. Ivan overrides him, for the moment, and orders his sailors to open fire on the Marines. 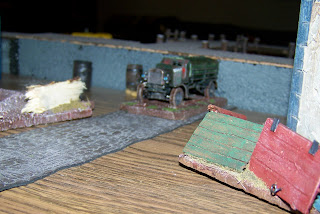 The object of both forces the fuel depot with a fully loaded petrol truck. 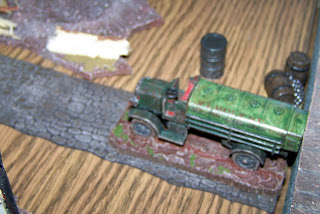 The petrol truck has seen lots of use, but is still drivable. 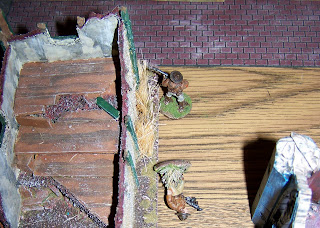 Without taking proper aim with his BAR, Lcpl Dedii lets off a burst that misses the Russians. Worse still one of the errant shots ricochets off a wall and fatally wounds Sgt. Roc! (Having rolled a critical miss, Thomas rolled on a special miss table. The result was hit a nearby friend. The BAR round then took Roc, who failed his luck roll, OOA-Out Of Action. Thomas was now down his best man and heaviest weapon. Things suddenly looked a lot harder for the Marines.) To be continued in Midgame.
Posted by Ushistoryprof at 8:20 AM