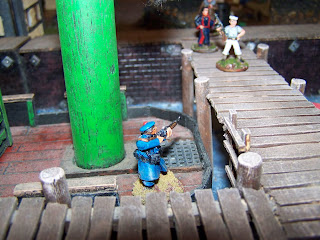 "Halt who approaches," calls out Pitan, the marine on stern guard on the Mon Cheri. The Dragon Lady gives the pass word and readies to board. She may have lost her lab or maybe not, time will tell. Being well prepared she feels confident of the future, she has valuable skills, a brilliant mind and a full copy of PRAM plans hidden under her dress. This is only a setback, she will rebuild, oh yes, the World will soon know of and fear the Dragon Lady! 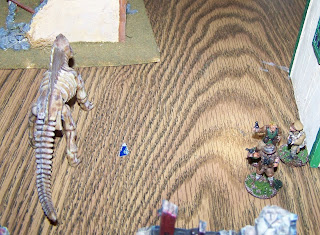 "Be very, very quiet and we'll make it out of here," admonishes Major Fisttrigger. As the PRAM passes them by, the three survivors escape and are surprised to find a very much alive Sgt. Smithers. Together they head back to British Territory, the patrol sadly diminished. The major ponders rather the information gained was worth the heavy losses. One thing is certain, Underlong will be mentioned in dispatches for his excellent marksmanship. 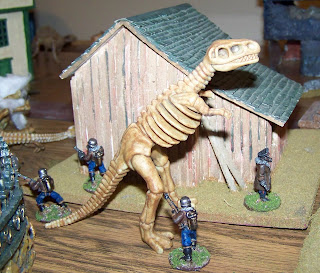 As the Imperial Air Troopers retire with their prize,Kapitän Himmelskrieger ponders his good luck, only one man lost and an invaluable new scientific breakthrough for the Kaiser. Only one problem...how the heck are they going to get this monster onto the light scout zeppelin hidden in the forest beyond the stream? 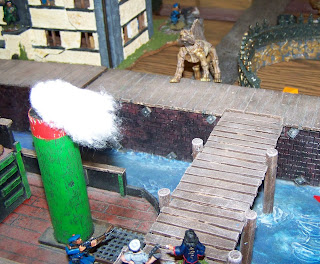 Ivan, having regained control over the errant PRAM directs the beast towards the Mon Cheri. It will be very valuable in convincing his superiors that he was justified in blowing his cover with the Tsarist Colonel General, Count Alexi Romonav-Stifenback. Ivan knows his future will either be a promotion or firing squad, the PRAM, controls and Dragon Lady will go far in helping him avoid the latter. (In the background Zola is still manning his post on the HMG awaiting orders, unaware that he is virtually alone. The revelations that dawn will bring might be quite shocking to the young marine.) 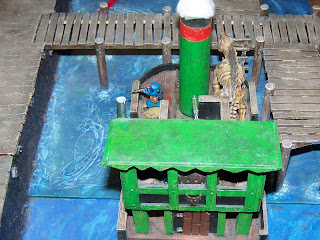 With the PRAM safely stowed, Ivan, Sam and the Dragon Lady climb to the bridge and ready the Mon Cheri for departure. 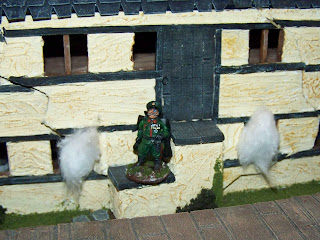 Where is everyone wonders the Colonel General. Then he notices the Mon Cheri pulling out from the dock. As the reality of the situation dawns upon him his anger rises to the boiling point! Wait...does he smell smoke? 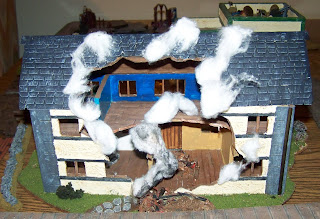 With a shattering explosion, the lab blows apart. The slow fuse Ivan lit with his cigar earlier had finally reached its explosive conclusion. No loose ends is Ivan's motto. 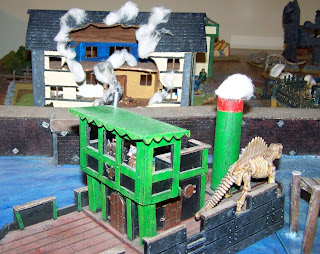 The Mon Cheri, with her priceless cargo, bids a not so fond farewell to the ruins of the Dragon Lady's lair. 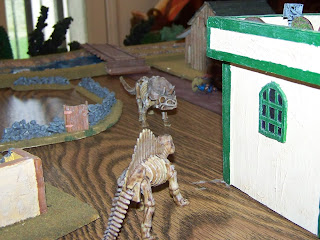 The Dragon Bones, without command controls, have the run of the base. They will attack anything that comes in sight. For now they are free and dangerous. 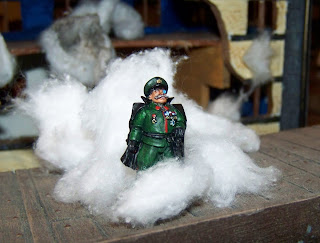 An ominous figure slowly emerges from the smoke and ruins of the PRAM Lab. 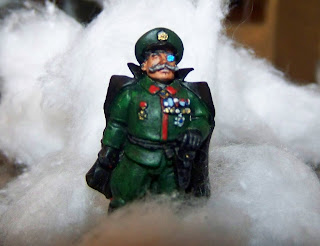 The Colonel General is beyond angry-his secret weapon system is gone as is its inventor. "Bolsheviks!" "Revenge is best served cold they say, but the pain will be hot and painful-I PROMISE!"

Posted by Ushistoryprof at 6:32 PM