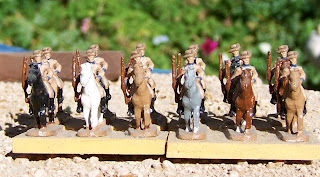 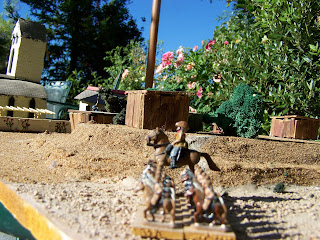 The Victoria Mounted Rifles were one of the many loyal colonial units formed throughout the British Empire during its height. Here they are in their 1899 uniform, when they were armed with the Lee-Metford Mark I rifle in .303 cal. with a sword bayonet for close in work.
These are the first figures I ever painted. When I orginally started miniature gaming and painting, in 1973, Jack Scrubby, of the Toy Soldier Factory, introduced me to the great world of 19th Century Colonial Armies. My first game was an African Colonial battle, were I learned the importance of forming square when facing hordes of melee armed natives. I was hooked and painted up Arab, British, French, German and Zulu colonial armies in this size.
As I had just started painting, I used my old Testors oil based plastic model paints for these guys. I started using waterbased acrylics later in the mid '70's. These troopers are from Jack's old n-gauge, they are about 9mm scale. The last photo shows a 25mm Minifig of the same unit for size comparison.
Posted by Ushistoryprof at 7:22 PM